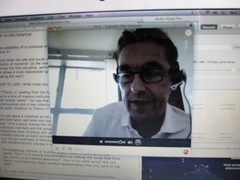 Otto Scharmer during our Skype chat

Since 1999, Dr Otto Scharmer has been running workshops on Presencing and Theory U – concepts he’s developed as a tool kit for stimulating “conscious evolution” and change in business leadership.

Dr.Scharmer is a senior lecturer in management at MIT in Boston, USA. His extensive private client list includes national governments, international institutions and multinational companies such as Daimler, PricewaterhouseCoopers, Fujitsu, and Google.

This week, Dr.Scharmer is in Munich, Germany. But he’s found half an hour to chat to me on Skpe. It’s half three in the afternoon, Dr.Scharmer’s just flown in from the US, and I imagine he’s pretty tired, but all that comes across in the call is great positivity and boundless enthusiasm.

Dr.Scharmer is part of the new hippie mainstream. The roots of his work can be traced back to the mid sixties. Dr.Scharmer believes that, since around 1965, through the last third of the 20th century, there has been “a new impluse going around the world, which really had to do with a profound [social] renewal and that came in a variety of different movements.”

These movements or “streams”, he says, appeared in three different ways: firstly in the environmental movement, secondly in the movements for social change (such as the Women’s and Peace Movements) and, thirdly, in “a deeper process that has to do with shifting our level of awareness from where we operate [now] to a higher level of consciousness.”

In the late 20th century, believes Dr.Scharmer, these three streams diverged and headed off in very distinct directions; now, however, they are re-converging:

Dr.Scharmer sees two forces at play: on an external level, concerns about the environment, about the ineffectiveness of established institutions and about individual careers and livelihoods falling apart. But on an internal level too, through close observation of behaviour in his workshops, Dr.Scharmer claims to have witnessed a “deeper longing” – particularly amongst younger participants – for “engaging with each other in different relationships and engaging with oneself in a different relationship”.

“This inner opening, this kind of inner predisposition to access a deeper level of self knowing, that is the other source: [the desire to] wake up to another level of awareness, of consciousness, as an individual – but also as a community.”

I think Dr.Scharmer’s vision sounds great but possibly a wee bit Utopian? What would he say to someone unable to sense the presence of any “deeper longing”?

“Certainly you could tell a different story that would make everyone depressed, right? I can tell that story as well and then you and I can both be depressed…but we [must work] with mindsets and attitudes that empower us, rather than making us more depressed.”

Dr.Scharmer may be full of positivity about humankind, but his mood grows darker when I ask about the web – and social media in particular. His view is that our current technologies have great potential, but we must be wary:

“There has always been the belief that technology transforms social relationships and that that will set people free. [But] that is not what happens. What happened in history was that technology became the tool for even better control, new forms of control – and [these were] used by the establishment to establish a more firm grip on the social structure, rather than transforming the social structure and empowering the marginalised groups to shape and create their future…we should be mindful of that.”

“[The web] has a great promise but [positive changes] won’t happen automatically. It will be a very co-creative process and I think, in our age, the new media, the new technologies, the new web technologies, need to be complemented with a new social technology. And it’s the social technology that allows us as groups, as collective entities across organisational boundaries, to shift our quality of attention from downloading, which is just doing more of the same, to co-creating together, which is really kind of accessing the collective creativity that we could utilise.”

We know it’s up to us to make the change. Technology alone can’t make the breakthrough. It’s up to us to put in the leg work and ensure we build something worthwhile. Time for anyone who’s good at motivating others to take the initiative.