It’s February 2008 and I’m putting together a session on legal issues for my creative entrepreneurship students at Kings College London.

I’ve been reading Don Tapscott’s thoughts around Wikinomics and excited by the business possibilities of open source development and creative commons licensing…but the media lawyer coming in to talk to my students can’t – or won’t – cover that area.

So when the invite to the Open Rights Group workshop: Creative Business in the Digital Era drops into my inbox, I’m curious. The workshop’s in March, a few weeks after the legal session for my students has taken place, but at least I can relay any new info to them.

So I apply for a place, get accepted and trundle along to the basement in Soho where the workshop’s taking place. And that’s how I come to meet Suw Charman, former ORG Executive Director, blogging doyenne and keen social media activist.

Suw’s wearing a suit and talking legalese in a posh accent, but she’s got her nose pierced, so she must be okay.

Suw and I get to meet up a couple of times over the next few months, and it’s clear that no search for leadership 2.0 would be complete without getting her take on it.

Fast forward to August and we’re sitting in the amenable confines of One Alfred Place on a sunny Wednesday morning, talking shop. 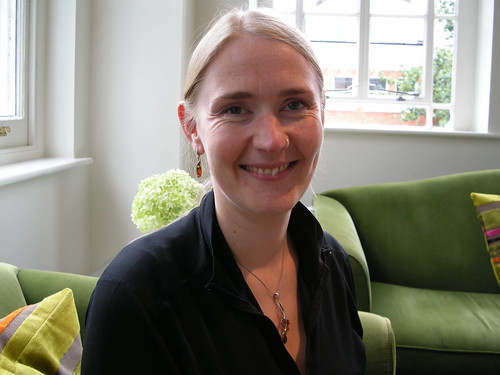 So what does Suw think the main problems are when it comes to business taking on these new approaches?

“The challenges are cultural more than anything. People don’t understand how giving something away for free can form a viable business model. There’s so much propaganda out there – in the film industry, the music industry and, to a lesser extent, the publishing industry – it’s easy for people to get swept up by it. Copyright violation isn’t theft. It’s a completely different thing. If I steal your wallet you don’t have it any more, but if I copy your music…it’s different. The main issue is mindset.”

Why is she particularly interested in what’s happening in the creative industries?

“I like the Tim O’Reilly quote about obscurity being much more of a threat to artists than piracy. The boundaries are being pushed a lot more in certain creative sectors – publishing, for example.”

Sue cites publishers such as Baen, Tor, Friday Publishing and even Penguin with its 1000 Penguins Project, as examples of businesses who are willing to experiment.

“It’s logical for writers such as Neil Gaiman to have blogs, to build up an online community. The blog builds up anticipation and then, when you actually publish your book, you can release it into your reader community.”

“For example, look at manufacturing. Look at the maintenance manuals for those classic cars that people have a soft spot for – they go for loads of money on eBay. If you’re a fan of the Ford Capri or the Ford Cortina and Ford gave you access to those old manuals online, you’d love it.”

Suw thinks that every company should do an IP audit to find out what could be released out into the market to help build and/or sustain a community.

“Obviously 100 per cent transparency isn’t good. If you’re Worcester Sauce, you don’t want to give away your recipe – that’s your unique selling point – but it’s all about being open and imaginative. Every company owns some IP that would be useful in building a community of fans. It’s all marketing. It all goes into generating warm and fuzzy feelings of goodwill.”

Suw’s not the first person I’ve spoken to to reiterate that our current Taylorist mindset has only really taken hold in the last 100 years:

“We have to remember that there’s this limited period that started with mass production and ended with digital production. [Mass social media] marks the end of a small minority of people having control. We’re seeing the democratization of culture.”

Be that as it may, Suw is clearly exasperated current legislation:

“Copyright law is becoming an ass. It’s technically illegal for you to copy a CD that you own onto your iPod. The law is so out of step, it’s becoming like Latin – a dead language. It’s not protecting the rights of the artists or the creators. It was created to benefit society. Now it’s no longer doing that. Technology has moved on, while copyright law has become massively more restrictive. You have to ask, what good is society getting out of this? When any law starts getting massively out of step with the society it represents, there is going to have to be a massive change.”

Suw is critical of the DCMS for going against the findings of the Gowers Review, which concluded that there would be no long term economic gain from copyright term extension.

“The Gowers Review was a very sensible report which recommended that we reconsider copyright law. The DCMS has completely ignored it and now says that it’s backing term extension. It all goes back to that question of propaganda. The very word piracy is overloaded with pictures of bluebeards and people getting their heads chopped off.”

So, is she optimistic for the future?

“It all depends on how successful the old school are in perverting legislation to prevent development of the natural business models. There’s so much corporate lobbying around. What’s interesting is how far the pendulum will swing one way before it comes back again.”