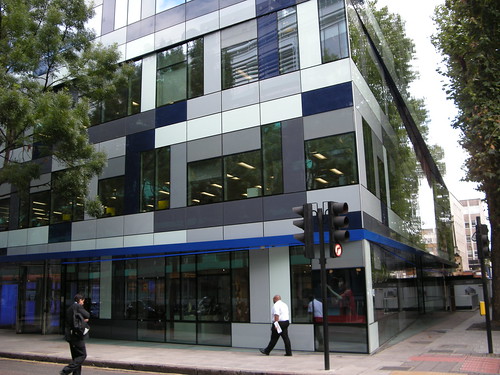 The headquarters of Arup (although no-one in the firm would like to refer to them as such), is made up by three shiny buildings on Fitzroy Street, on the north-east edge of London’s West End.

Two of the buildings have been recently gutted and re-furbished, while the third, newly re-opened, was razed to the ground and completely rebuilt.

At first glance, the buildings don’t look too dissimilar to the ordinary office blocks in that part of town. But then you look a bit more closely and see a flourish here, a serpentine line there.

Arup is a hybrid firm of engineers and architects, and has been at the top of its game now for some 60 years. Sydney’s Opera House, London’s Gherkin, Edinburgh’s Scottish Parliament, Beijing’s Bird’s Nest – they all have the Arup signature.

Futurist Duncan Wilson meets me at no.13 Fitzroy Street, and shows me round the new public exhibition space, currently focusing on Arup’s work in China – nicely timed, with the Beijing Olympics are taking place as we speak.

Duncan’s job, as one of the eight-strong ‘Foresight’ team, is to run ‘thought-leadership-type’ workshops and create content for the ‘Drivers of Change’ project, which publishes books and flashcards on future trends for both in-house and public use. 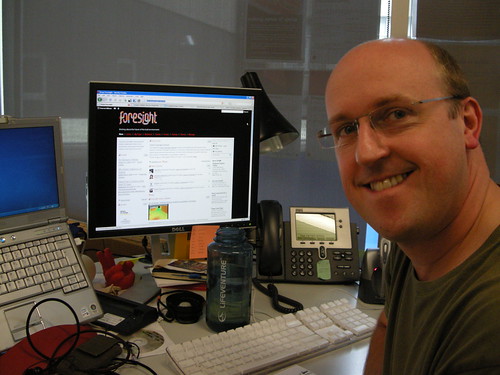 He admits that Arup is a great place to do this sort of work. Famous for its flattened hierarchical structure, with 10,000 employees all owning the firm, Arup is renowned for its innovative culture.

“If you go back to Ove Arup [founder] himself, his whole approach was that design should be holistic. In the 1960s and 70s, that was highly unusual. That collaborative approach (engineers working in conjunction with architects) is embedded in the culture here. There’s a ‘de facto’ sharing nature. People expect it [openness] of Arup.”

However, even Arup’s directors do not always sit easily when faced by projecs requiring open source and alternative approaches to intellectual property.

“One of the issues is that we’re starting to use new technologies. Senior executives don’t use Flickr, Facebook etc (in fact, sites such as Facebook and Youtube are banned as they are considered a waste of time and, more importantly, bandwidth). The underlying message is ‘how can we control this stuff’. But it’s mostly just a fear of the unknown.”

One of Arup’s current projects is the design of Don Tang, a huge eco-city in China.

“We’ve whole teams of engineers working on the modelling process, seeing what works and what doesn’t, trying different things. We already use games technology for a lot of the modelling. But it would be great if, rather than just number crunching in isolation, we could open source some of this information, put it into a Sim City type of environment and watch what happens.

Traditionally, like most industries, the engineering sector doesn’t share, but Duncan can see huge public benefits opening up it certain types of data could be pooled.

“Take post-occupancy valuation for instance. That’s when a team of architects go back into a building to see if it’s functioning correctly, if it’s providing the type of environment it was designed to provide. The role of the facilities manager within companies is becoming more strategic and important as environmental concerns are increasing. I can see a future where the data of what a building is doing – eg, how much energy it’s using, and where – can be streamed for public consumption.”

You read it here first – time for the ‘what my building is doing’ channel.

One reply on “Coming soon to a TV near you…”

Just as a footnote: Arup also run a number of conferences and events where they open up findings and ideas to clients and, even, competitors