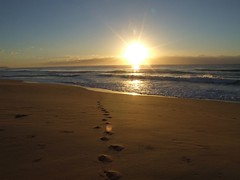 After eight wonderful years, iKnowHow is calling it a day, kicking off its trainers and walking off into the sunset (while owner Jemima Gibbons looks forward to no longer having to talk about herself as a separate entity ☺).

The world has changed a lot since March 2002, when I set up iKH with Alison Linskey to “provide consultancy and training in digital media to film and TV production companies”. When we started television was still very much at the centre of the media universe and the early years were shaped by work with Women in Film & TV, BT (in its efforts to become a broadcaster), Skillset and the UK Film Council.

But things were shaken up so much more than we anticipated. While the web has gone stratospheric and mobile is truly ubiquitous, interactive TV has diverted up its own strange back alley. Instead of television becoming “all media”, the web has become the most powerful medium we have. To the point where we no longer see the boundaries (between us and “it”).

More recently, I’ve been working with Triarchy Press, Cass Business School and the RSA, the first two organisations focused very much on the future of business, the other focused on the future of society as a whole. And all three looking deeply at the impact interactive, digital and social media are having on our lives.

My 2009 book, Monkeys with Typewriters, was a stab at understanding this brave new world we’re in. It feels like I was only scratching the surface. Now, I want to focus more on my writing, and more on social business design. It seems like the time is ripe for a re-brand – this will be my final blog post at iKH.

If you’ve supported iKH over the years, thank you so much. If this is the first you’ve ever heard of it, feel free to read back through the blog for a re-cap. ☺

For the next three months, I’ll be based in Jaffa (Tel Aviv), exploring Israel from the grassroots up. Beach, sunset, here I come. See you on the other side!

In the meantime, you can always:

Join my Jaffa adventures on Twitter
Muse social business with me on the Monkeys with Typewriters blog
Follow the re-brand at jemimagibbons.com