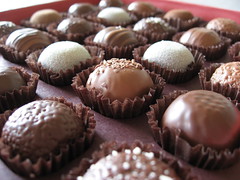 After lunch we broke into smaller teams to try and find some solutions to the problems identified in session I. The easiest way to to do this seemed to be to work on one specific case study.

So, we wondered what might happen if a large American multinational food company acquired a small, much-beloved British chocolate company founded on altruistic principles. How would that new, combined company deal with the clash in cultures? How would it synthesize the many individual brands? How would it combine and streamline production processes? If it shut down UK factories, would the British public boycott its products? Above all, what would this new integrated company need to do to become a fully-functioning, fully social business in five years time?

First off, we had to define this company’s ecosystem. As a quick and easy way of identifying all the stakeholders that might be involved. My group decided to use Porter’s Five Forces model as a starting point: employees, competitors, buyers, suppliers, partners and new entrants were all identified as key.

Here are the five “solutions” we came up with:

Management/ bosses: as a way of easing uncertainties, get as many managers as possible to blog. Make the managers more visible, give faces to the names (and policies?); provide staff with more information about rationale; combine online openness with offline – more physical walking of factory floors; if morale gets really bad and redundancies are inevitable, maybe even consider public apology ala Tiger Woods (to staff who’ve lost jobs, their families and communities).

Employees/ suppliers: establish a social networking platform and encourage people to build communities of interest/ share best practice; in a toxic environment (where people fear losing jobs etc) be careful to use appreciative enquiry: ask what’s working rather than what’s not; foster leadership; give some kind of incentive for contribution. Use these networks/ communities to empower and engage staff by pushing decision-making down: say, this is our problem, how would you solve it? If possible, announce a two-year moratorium on factory closures, this means that employees feel they at least have a chance to argue their case.

Suppliers/ partners: open up networking platform and – especially – problems to suppliers and partners.

Big thanks to Alex Ang, David Osimo, Gillian Martin Mehers, Glen Mehn, Steve Dale and Tillah who were on my team. Thanks also to everyone who participated in the malleable “ecosystem” stream.

Overall, it was a great day: frustrating and inspiring in equal measure. Maybe we spent too much time deliberating and not enough time coming up with definitive “answers”. We certainly spent a lot of time connecting, arguing and – even! – listening to the others’ points of view.

All that can be quite messy and the immediate benefits are often unclear. And we still don’t have a coherent definition of “ecosystem”. We didn’t come up with any ground-breaking solutions, but we had fun.

For additional perspectives on the day you might like to take a look at these posts by Lee Bryant, Anne McCrossan and David Terrar.

Finally, here are a few things that came up in discussion that I hadn’t heard about and am now off to take a closer look at:

Twitter Always: “the future” according to 90:10’s David Cushman
Netflix: offered a $1,000 prize for anyone who could improve their algorithm.
Child’s i Foundation: run baby showers on Twitter
Business Model Innovation – a book on user-centric business models.
Unilever’s “happy” acquisition of Ben & Jerry’s
Boeing’s construction of the 787: the “dreamliner” project 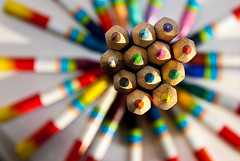 As promised, here’s a summary of the group discussion I moderated at the SOMESSO/ Headshift Social Business Summit last week. The discussion ran over four hours with an hour-long break for lunch. This post is all about the morning session.

Our pre-lunch session was devoted to identifying and appraising positive case studies in social business, but we quickly became absorbed in what my mum would politely call “pencil arranging”. First off, we spent a bit of time in introducing ourselves – it turned out we were a real mix: some public sector, some working for charities, a couple of big corporate employees and a sprinkling of independent consultants. Then we got rather bogged down in defining the area we’d been given to look at: business ecosytems.

I’ve already blogged about this over on Monkeys With Typewriters: thinking about ecosystems is very de-constructivist: where do you stop – and where does it all end?!!

After some debate, we agreed to stop worrying about definitions, and decided to focus instead on the problems organisations might face in developing a social approach. Here are the key issues we identified:

After lunch came the real challenge: could we come up with workable solutions?